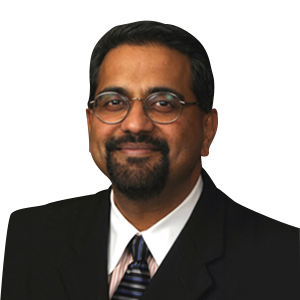 Krish Dhanam joined the Zig Ziglar Corporation in the sales department in October of 1991. Through speaking and teaching the timeless principles of its legendary founder Zig Ziglar, Krish soon embarked on a career that has seen him facilitate workshops and conduct seminars all over the world. His current assignments include functioning as Vice President of Consulting and Business Development for Ziglar True Performance and Co-founder of Krish Dhanam Training International.

As a writer he has authored articles on a range of topics spanning from personal relationships to corporate change. Recognized by his peers as a dynamic personality, Krish says that sharing a stage with a President pales in comparison to watching a movie with his son.

In many ways Krish Dhanam is the epitome of the American Dream. A native of India , he arrived in the United States with nine dollars in his pocket and a vision of promise in his heart. The American Dream from an Indian Heart is the unfolding of that journey and its hidden promise. In a practical and informative way, Krish showcases how the American Dream is still alive and well. He tackles the issues of faith, freedom, discipline, dignity, pride, possibility, work ethic and relationships with word pictures that will resonate with readers long after they put this book down.

The advice Krish offers will stir you to the foundation of your belief in this great and awesome land. He reverently pays homage to “the land of the free and the home of the brave” as only a grateful immigrant can do. With a glowing foreword by his mentor Zig Ziglar, this book has also received accolades from communication giant Nido Qubein, sales master Tom Hopkins, and spiritual philosopher and theologian Dr. Ramesh Richard.

The road Krish Dhanam took to becoming one of the most dynamic speakers in America began in southeast India with the dream of moving to America. He arrived in New York City in 1986 with nine dollars in his pocket and a burning desire to achieve the levels of success he’d seen in the American-made movies he viewed as a child.

Krish won a sales contest and a ticket to a seminar conducted by Zig Ziglar. That chance encounter in 1991 led to an association with Zig and his company, Ziglar, Inc., that exists until this day. From telemarketer to Vice President of Training for Ziglar Training Worldwide and Director of International Operations for Ziglar Training Systems, Krish’s climb to the top has been phenomenal. He learned firsthand what it takes to be a stand apart speaker from his mentor, friend and now colleague, Zig Ziglar. Krish is the author of the book, The American Dream from an Indian Heart. We’re proud to represent him as the exceptional speaker and trainer that he has become. Krish’s professional speaking career has taken him over a million miles, into thirty countries and forty-five states across America. He has shared the speaking platform with Zig Ziglar more often than any other speaker and his dynamic, energetic, engaging and often riveting speaking style allows him to shine when so many others would pale by comparison. He can take a listener from laughter to tears and back again in an instant, and his message of hope, his passion for freedom, and his immigrant’s perspective leaves his audiences inspired, grateful and challenged.